Not much time to post, but suffice it to say that things are a bit different as of the New Year. We found a new practice of doctors closer to home and so far, we are very pleased. Jade had lengthening rods placed on February 20, 2012. While the surgery itself was a success, we had a few setbacks and remained in the hospital for a few weeks. She ended up coming home with a GJ tube because of increasing reflux/vomiting post-surgery. She also had an emptying study which indicated she has very delayed emptying of stomach contents. She is now on continuous feeds via pump. It's both a curse and a blessing!
Since we are new to this practice of brain docs, we felt that since she was going to be hanging out in the hospital, we might as well hook her up for an EEG. It had been a couple of years since she had one and I was curious about many of the actions she was exhibiting. I couldn't figure out if they were seizures or not. It turns out that her EEG is showing an origin of seizure activity in her right occipital lobe (explains the many "eye deviation" seizures we see) and the activity spreads immediately to the rest of her brain, causing tonic seizures.
Jade underwent continuous VEEG monitoring for 4 days to ascertain whether she is a surgical candidate. Her epileptologist and the neurosurgeon both feel that a Corpus Callosotomy is the best option for surgical treatment to help prevent the spread of seizure activity. Yikes! That, obviously, is on the back burner for now since we are still trying to get back into her home routine after the spinal surgery.
During her EEG monitoring, the docs stripped her cold-turkey of her Keppra, Banzel, and Clonazepam, and halved her Phenobarbitol dosages. I was, of course, nervous about stopping so many meds so quickly for fear that she would bottom out with seizure activity. But, we needed to get a clearer picture of where the seizures were coming from and spreading to. Needless to say, she became much more alert and we saw many smiles in the week after the med decrease! She didn't "bottom out" as expected and it is such a relief to not have to dope her up so much. She was sent home on Depakote with instructions to slowly wean the rest of her Phenobarbitol. This particular doctor (the epileptologist) believes that if two or even three meds do not work to control seizures, than why keep adding more? I completely agree, and it is obvious it is true considering her seizures are not much different from the very first one we ever witnessed.
So, we head back next week for another consult with the epileptologist and a follow-up with her new neurologist. Keeping my fingers crossed for productive visits...
Posted by Unknown at 11:30 AM

Our peanut in a nutshell...

Hi everyone! Thanks for visiting my blog. My name is Jade and I am currently 8 years old. I have a big sister and a big brother whom I love very very much.

I have a very rare neurological disorder that isn't even named yet! It is a genetic mutation called CDKL5. It is considered a variant of Rett Syndrome and presently, I am only one of around 600 or so children in the world documented to have this mutation. Each child is unique in that his or her symptoms vary quite a bit. Unfortunately, I am one of those children who is affected much more severely than most of the kids.

Some of the problems I face include:

Reflux (in October 2006, I had surgery to have a Nissen Fundoplication done and to have a gastrostomy tube inserted for feedings). As of March 2012, I have a GJ tube for continuous feeds.

I am hypotonic - I have virtually no muscle tone and I find it difficult to even hold my head up on my own.

I have cortical vision impairment - my brain doesn't process the images it sees. Sometimes I see off to the side, sometimes, my vision is shuttered, sometimes I don't have any vision at all. The doctors and my Mom and Dad don't really know how or what I see because I can't tell them.

I cannot talk nor communicate with gestures.

I cannot walk, nor will I ever walk.

I grind my teeth. So much so, that some loosen during seizures.

I cannot grasp objects or use my hands for the simplest of tasks.

I cannot sit on my own. I can, however, sort of roll over from side to side.

I am choreoathetoid. I cannot control the jerky movements my arms and legs make.

I have life-threatening seizures every day. This is my greatest challenge.

So, now that you have gotten to know me, please feel free to take a stroll around my blog. Some of it you read may seem depressing, horrible, unfathomable, and downright crazy. But, this is my life.

Jade's CDKL5 friends (click on their names to read their blogs) 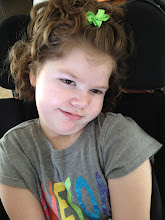